In the absence of interesting personal experiences, I’ll just write about Barbie’s.

The iconic doll Barbie not only got a large array of accessories, careers, relationships, style, she has also been critiqued widely for her ‘far from average’ body negatively influencing body image and for over all distorting the world view of the little children playing with her.

In reaction to declining sales rates, with Disney’s Frozen Elsa and Lego taking over market shares, Mattel gave her designers the freedom to do whatever to make Barbie more relevant. The outcome? In 2015, a larger variety of skin tones and hair textures were added to the mix of blondness. These dolls will all be wearing the name Barbie, instead of having different names and being Barbie’s friends 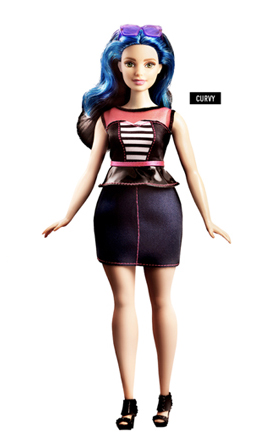 In January 2016 three new body shapes got released: Curvy, Tall and Petite! You can learn more here on TIMES. More interesting is this article on TIMES titled ‘What I learned watching moms and kids meet curvy Barbie’. Apparently, the kids really liked the blue-haired doll, (because) it reminded them of Katy Perry. They don’t seem to mind the curvy bit at all. That is just so cute. This linked article also features a gallery of pictures of a variety of new dolls, including the blue-haired one on the right.

I like Mattel’s change towards having different body shapes and I found the new Barbies quite nice to see! If it will really make a different is still unknown, but it can’t be much other than an improvement, no? Of course Barbie’s one-sized body isn’t the only thing that’s shaping body-image in children, but it’s not really a positive influence either.

You may not be convinced of the importance, are you? Well, this from the TIMES background article will make you doubt the original Barbie design: [Barbie’s body was based] ‘on a German doll called Lilli, a prostitute gag gift handed out at bachelor parties. Her proportions were designed accordingly.’ Yeah, it makes total sense to design bachelor party gifts and toys for small children in the same way. Also, when Barbie was introduced ‘in 1959 at the New York Toy Fair, her male competitors laughed her out of the room: nobody, they insisted, would want to play with a doll with breasts.’ Well, they were proven wrong.
And here, research found at least some effect of Barbie on body image: ‘The most compelling, a 2006 study published in the journal Developmental Psychology, found that girls exposed to Barbie at a young age expressed greater concern with being thin, compared with those exposed to other dolls.’

Perception of the inner child & mom

From personal experience: I do remember observing Barbie’s body as a child and be somewhat puzzled about its shape and wondering whether it was ‘normal’ or something. Perhaps that would’ve happened regardless of the exact body shape, since my body definitely didn’t look like an adult woman’s back then, but still! I do think the high dosage of Barbie’s uniform body in childhood combined with the ‘idolised image’ of Barbie contribute to internalising the ideas of having to live up to this ‘ideal’ body shape. And this is totally wrong.

I remember feeling more comfortable with the smaller Shellies and finding it a relief to play with other dolls which looked differently and were less ‘perfectly styled’ sometimes. However, I did come to believe that Barbie was prettier, which kinda sucks. So I think having a variety of dolls is good and I would have liked to have the Curvy, Tall and Petite Barbies in my collection! I’m sure my mom would’ve liked it too, which is important, for moms get to decide on the toys.

Browsing through the pictures makes me want to make them clothes! My sisters and me used to do that, under supervision of our mom. Those’re good times. But now we get to clothe ourselves, yay. (Ay?)

What do you think about the transformation? Do you like Barbie? Are you interested? 🙂 If you are, you may also like other posts on my fabulous body image tag page.

This isn’t the latest news or anything, but I am writing from this cave where the Facebook algorithms decide which information comes to me. Can you hear me?! (I’m exaggerating a little. Okay.)

Yes to Nose & no to plastic surgery