As I was deciding on something important to write about, the What I Be Project popped up. What I Be (WIB) is a project of photographer Steve Rosenfield, for which he takes portraits of persons with their greatest insecurities written on them for everyone to read. 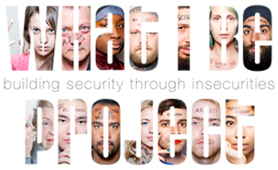 Every person thus picture also comes with a statement from their side starting with ‘I am not my’. The pictures and statements are meant to show that these and actually all people have insecurities, but instead of being owned by those, these people are owning them.

Steve writes: ‘By stating “I am not my_____,” they are claiming that they do in fact struggle with these issues, but it does not define who they are as a person.’ (…) ‘It is to spread awareness on what people go through due to society’s paved roads. These are serious issues that some of us can live with, but most battle on a day to day basis.

Steve started photographing for this project in September 2010 and had since then been capturing insecurities of hundreds of people. I did not count, but you can see for yourself, for all pictures are being posted here on the website. There are category pages showing only the pictures taken at a certain location, as well as pages showing pictures of people with insecurities of the same ‘theme’. The most well-filled categories of the latter type are personality, body image, disorder, ability and anxiety.

I think Steve’s message and the aim of this project are enormously important. A lot of people are struggling with their insecurities and their fear of not being good enough in one sense or another. Projects like WIB can help to indeed spread awareness on this, so we can start talking about our insecurities more openly, and come to realize that we are actually united through our vulnerability. Our insecurities are not all the same, however a great deal are of similar themes and they are all honest and real. Can you see what they are about? I really think looking at these pictures can make you a better person, for it enlarges your understanding of others and yourself, allowing you to be kinder to both.

Brené Brown on the Power of Vulnerability

Talking about vulnerability: Have you seen Brené Brown’s TED talk The Power of Vulnerability? I highly recommend to take some time, about 20 minutes, to watch it. It is about how vulnerability, which scares most people, is actually a really good thing. It’s about the relationship of vulnerability with connection and more. Besides saying all these smart and important things, Brené is also just really funny, so you can watch her talk for fun. She has also written a book with the same name, The Power of Vulnerability, and I’ve already been recommended it twice, by two different people, so it must be good. I’m sure it is.

I will surely get back to this topic later and discuss my own insecurities and how I am dealing with them. I can already reveal that I recognize myself in a lot of the courageous people who have been posing for the WIB project. Do you?

Beware of what your bubble reflects back to you

Spirituality meets polyamory, and they fall in love