The Circle, written by Dave Eggers, is a novel sketching a terribly plausible scenario for the future. The story is about an employee at The Circle, a young and hugely successful company that has started integrating all different online services into only one interface, to make your life easier. But that’s not all the company does: it not only markets its products but also its philosophies. 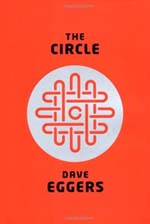 The story starts when Mae Holland, a woman in her early 20s, is recruited to work at The Circle. As a reader, you follow Mae’s experiences in the company and in life, which more and more take place on the high-tech, super luxurious campus with glass walls. Mae illustrates how easily one can get influenced by its surrounding culture – and how big a role social media can play in one’s life. At first she seems to be living in a dream world, but is she really?

So what does The Circle do? They have bought up all social media platforms and integrated them into on. And it isn’t only about social media: wouldn’t it just be easier if you’d only need one password and one interface for everything on the web, instead of having all these different systems next to one another? And if all information would be easily accessible to everyone? They’re inventing all kinds of new technologies, meant to make your life easier and safer.

And how does one use technology to make life safer? You may be able to think of ways. I don’t want to spoil too much, but you can imagine where it could go from the combinations of social media, ease and safety…

Although quite some passages are too lengthy in my opinion, enough alarming events happen and ideas evolve to keep you reading. The philosophies of The Circle are so intriguing, mainly because they make sense in a way. All ‘circlers’ including Mae accept them and live accordingly. I don’t want to spoil the nice details for you, but there are quite a lot shocking things happening! You should really read the book. I’d also say that you better not read more reviews before starting, to prevent encountering the spoilers.

To tickle you a little bit more: one thing that made a huge impression was a quote or slogan that gets a prominent place in the The Circle buildings. It is so completely mind-blowing and bewildering, it confuses me still. If you’ve read it already, you probably know what I mean!

I think everyone should read The Circle, because this novel is highly relevant to our time, in which ‘everything can be found on the internet’ and we aren’t sure where we’re heading with this. Social media is still so young and the internet and its (our) culture is shaped by whom really?

If you really want to, you can already read a few fragments of The Circle here and here, but you can better start at the start! I just read a few passages there and I’m impressed again. Woah.

Please consider the environmental before buying the book. Ask your friends and public library first. 🙂

2 thoughts on “The Circle: we are all connected, all the time”

On my path & the kundalini yoga chapter