Look at this magnificent creature.

You may refer to it as Spiral Vegetable Tart and Veggie Roulade. I prefer Super Awesome Psychedelic Spiral Rose Vegetable Pie. That is a perfectly accurate description. I created it and since then I’ve spent my time openly bragging about it. It got me 50+ likes – which only encourages this behaviour.

It’s really easy to make and I would like to see everybody doing so and posting pictures of the result on their social media. As long as you’re making my version and not the original one of Food Republic, for I have used pumpkin hummus as a base for the veggies in stead of some dairy shizzle. However, you should definitely go to that Food Republic web page and check out the video to see how you do the spiral thing. Or, if you can’t wait, here’s a short cut: they start in the middle. Other than that: the vegetables are just carrots, zucchini and eggplant, sliced really thinly. As you can see I didn’t put too much effort in making sure all vegetables had the same width and that made it look like a rose! So don’t worry too much about that, it will sure be pretty.

And, not unimportant, it was really tasty as well! Here you can see one of the slices. I didn’t put too much effort in slicing the pie neatly either, so it might look even better when you do. Even better than this?! That’s just… wow. 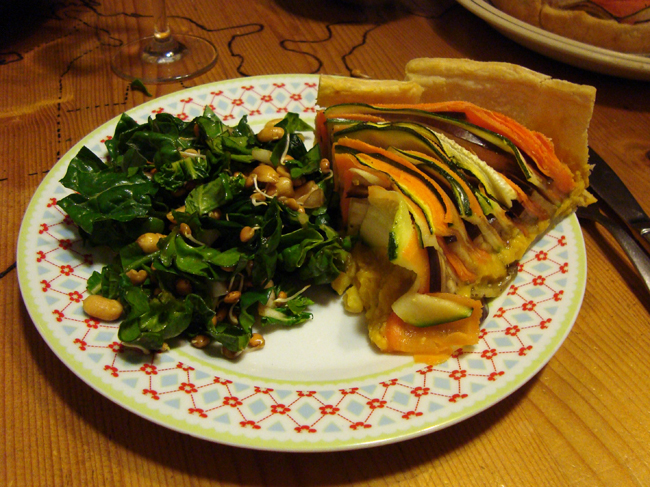 The combination with the salad was pretty cool too. Here’s a recipe (with no amounts):

I trust to hereby having convinced everybody of the fact that vegetables are the coolest food. If you have further questions or comments, I’d like to hear from you.

6 thoughts on “The Spiral Vegetable Pie”