In my surroundings many people have become aware of the impact of ‘stuff‘. This awareness was raised by among others the documentary Minimalism (available on Netflix) and recent research in which was found that the role of stuff in causing climate change is very large. Simply put, the production and transportation of stuff contributes to climate change and other environmental problems, like pollution. Moreover, to produce stuff, many people work in unhealthy working environments for too little money. Very simply put: a lot is wrong in the world.

It occurs to me as if many people find ‘de-stuffing‘ to be the answer: throwing away stuff you do not want or use anymore. The benefits include that your house gets more spacious, which allows for a clearer mind also. Less stuff equals less distractions from whatever you want to be doing or not be doing. I can totally see that.

The stuff you throw away can be given away to second-hand shops or charity, so that others may use it. That way, others can get your stuff for free or for little and they will be happy. Also, they do not have to buy new stuff, because they got it second-hand already, which spares the environment!

So by giving away your stuff you create more happiness for yourself, others and the environment! Win-win-win!

Who uses your old stuff?

Now I wouldn’t be writing this if I did not have some comments.

The phrase ‘throwing stuff away’ is way too simple. Where your stuff goes when throwing it away depends on multiple things: Is it in good shape? Can it still be used? Can it be repaired or improved? Does someone want it? Will your stuff get to the person who wants it? If not, can it be recycled? Will that actually happen?

It’s too easy to think that other people will be happy with your stuff. In our stuff-filled culture, most people are used to choosing what they want – as opposed to accepting what is available in some second-hand store.

In my town many people go to second-hand stores, however, at the same time many people do not hesitate to buy cheap stuff in cheap stores. This often concerns stuff that is not regarded as important to begin with. The rationale is something like: ‘I want this irrelevant thing so I’ll just get it quickly and cheaply.’ People tend to not want to put more money or effort into stuff they do not value high anyway. However, apparently they value the stuff enough to still get it – for a few bucks.

I regard being or becoming a conscious consumer as more important than getting rid of the stuff you already have.

For the stuff you already have, most of the impacts (positive and negative) have already occurred. Natural resources are extracted and transported, the items are put together in factories or else, the items are transported to re-sellers and finally to you. The use stage of a product generally omits less negative environmental impacts than the production stage.

Thus, when stuff is in your house, the environmental impacts are already in the past. Stuff sitting in your house likely has no impact anymore or only very little.

Everything you buy or obtain has been produced and has impacted the world. By buying or accepting free stuff, you encourage the producers to produce more of it. This goes for about anything, for low-value one-time-use stuff and for high-value sustainable stuff.

Every time you buy something you vote with your money. This is why I think that being a conscious consumer is far more important than engaging in ‘de-stuffing your house’.

Of course, re-using and recycling are important, but I think there should be more emphasize on the other end. There’s a total of six Rs to keep in mind:

First, rethink what you (want to) buy, then reduce the amount of stuff you buy and refuse to buy stuff you do not actually need or want or stuff with a large negative impact. Repair stuff that’s broken so that you can use it still. Here you can drastically reduce the negative impacts of your consumption, through consuming less products, preferring high-quality products that will last longer, preferring products that can be recycled (avoid plastic) and choosing for products that are made in a better way: that have less negative or even positive effects on the local environment, on the global climate, on the producers (land and factory workers) and their living environments and livelihoods, and on animals.

Consumers have to engage in re-using and recycling through buying second-hand and recycled materials.

I think this part of re-using and recycling needs to be emphasized. The ‘trend’ of ‘throwing stuff away’ may assume that others will do the re-using and recycling for you. I am afraid that this throwing-away rationale leads to people thinking that as long as they get rid of their old stuff, they don’t have tot take further responsibility.

Please take your responsibility as a consumer seriously. Use your money to vote for better production systems and for a sustainable future.

To wrap up, I’ll spend some words on properly ‘throwing’ your unwanted stuff away.

If you do not value the stuff at all and you won’t in the future, there’s no reason to keep it. However, you have to be aware of what will happen when you throw it out – and how you can influence this. Please do your best to share it with others who may use it: Do you have friends who may want it? (As a present?) Can you bring it to a second-hand store? Can you sell of give it to someone online? Some items are not suitable for second-hand stores, but can perfectly be given away for free through online platforms (such as Facebook groups with this purpose). Read also this old post by me on several ways of sharing ‘unwanted’ stuff.

If stuff has no chance of being used by someone else, can you use it for another purpose? Old clothes can become cloths for cleaning, for example.

If you want to recycle, do it in the proper way. 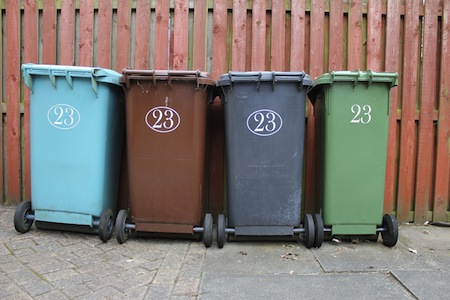 This all seems very obvious, right? Bring to second-hand stores, check! However, my point is this: many things are not likely to find a new owner or being properly recycled (currently). If that is the case, ‘throwing your stuff away’ does not benefit other people or the environment. It benefits you and your personal home environment, but that’s it. So be careful there! Preventing unwanted stuff to fill up your house is better than throwing it away afterwards.

I also love to refer to this quote that was spread to prevent overconsumption on last ‘Black Friday’:

6 thoughts on “Too much stuff? De-stuffing needs conscious consumption”

Remember to support small businesses this December and beyond

The easiest year to not buy new clothes